Rev 8:1 And when he had opened the seventh seal, there was silence in heaven about the space of half an hour.

God had revealed to Bro. Branham the Six Seals in 1963. The 7th was not revealed at that time. Isa 30:26 had not come to 7 Fold. The Bride would require more light before the rapture could come.

We know when the 7th Seal is revealed that Jesus is NO longer High Priest and salvation by grace is over.

Rev 8:1 is when the 7th Seal is opened and the Mighty Angel of Revelation of Rev Chapter 10 is coming to earth only to the living Bride.   Jesus at that time, is occupied with the deceased Bride Saints throughout the Grace Age. This is where Jesus is sounding the Trump of God. (1Thes 4:16).

We know that the opening of the 7th Seal starts the half hour Silence time Factor. But what is that silence? It’s not vocal cord silence, yes there may be some vocal silence for 10 minute maybe one hour as to the saints in Heaven.
I’m sure Satan is not going to keep silent. Remember the silence is in Heaven – not on earth.

The silence pertains to NO MORE REVELATION FROM THE THRONE BECAUSE JESUS IS NO LONGER ON THE THRONE of Mercy. Revelation will be coming to us; first from the Angel of Rev 10 – he sounds his voice and seven men will sound their voices, as God now is speaking through them.

This Revealory silence in HEAVEN continues until we meet Jesus in the air with the resurrected bride saints and we all go to HEAVEN at the wedding supper. This is where the Silence ENDS .

For the critics: This in NO means tells you or I how long the Silence is. But it does tell us when it starts and when it ends. If someone can tell me how long the Thunders are to last and how long the Bride is to Prophesy to the nations, then we may know.

But no one at this time knows how long the period is going to last.

Also while looking at (Rev 8:3-4) that angel is acting in a Priestly Office and it’s not Jesus Christ.

Rev 8: 3 :And another angel came and stood at the altar, having a golden censer; and there was given unto him much incense, that he should offer it with the prayers of all saints upon the golden altar which was before the throne.

Rev 8:4 And the smoke of the incense, which came with the prayers of the saints, ascended up before God out of the angel’s hand. 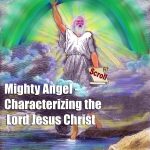